I am a writer with an interest in pervasive gaming, interventionist performances and creating immersive theatrical experiences and immersive theatre design for the audience.  Below is my CV, a link to a selection of my work and some of the writing projects and commissions I have undertaken.

examples of my work here: https://chainy.com/profile/alicja-shaw

Commissioned as a writer and game flow and installation designer to work with an illustrator to create a dynamic and interactive digital narrative embedded into graphic image and develop an interactive installation. Audience members scan the image with a specially designed app to access the story narrative. They are then taken on a journey where they become a member of the ‘Stalker’ underground, have to solve clues, find and explore installations, interact with characters and gather a set of numbers which they use to open a safe and solve the mystery. 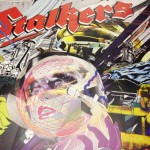 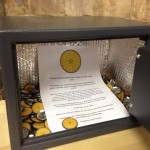 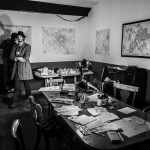 Commissioned by Covernomics to write the overall storyline and design the installation for a new form of immersive theatre using a combination of pervasive gaming, new technology, interventionist performances, large scale installations and real life locations.  A hybrid arts and research project in partnership with Covernomics, UrbanAngel, Mixed Reality Lab, The University of Nottingham and University of Southampton as part of the ORCHID project.

Apocalyps of MoP (Ministry for Provenance)

Commissioned to develop the storyline and write all narrative for the episodes and other associated copy related to the overall story of Apocalypse of MoP. MoP was a hybrid work combining non-linier narrative, highly personalised interactivity, gaming and research. Participants join a secretive underground organisation fighting for our digital freedom. The audience then work undercover to expose the Ministry of Provenance from the inside. Collaborated with musicians, digital artists and performance makers.

During the project a large and varied selection of printed and digital documents and other media had to be faked, some example documents are shown below and a small selection of the video and audio media produced has now been declassified and can be found on the MoP YouTube Chanel and the Cr0n YouTube Chanel. 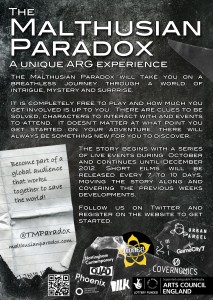 The Malthusian Paradox was a free to experience and highly immersive transmedia narrative. The story played out both online and in real life across the East Midlands. Commissioned to write the narrative for six filmed episodes, develop the live interventions and additional auxillary digital/real world material and also incorporate audience made content into the storyline. Worked and collaborated with musicians, filmmakers and performers.

Audiences participate through joining the resistance (AMBER) and completing digital/real world assignments. Working in partnership with University of Nottingham and in collaboration with The Quad, Derby; The Pheonix, Leicester, Nottingham Contemporary ; National Centre of Craft and Design, Lincolnshire and Gamecity.

To see more photos and video from the project check out the Flickr Gallery and YouTube Channel.

During the project participants where encouraged to created their own blogs to document their experiences and promote AMBER. A few examples of these sites are listed below: 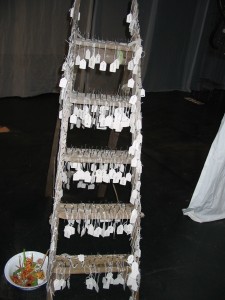 Designed an installation for Authorised Stress.  Authorised Stress explored at the last second of your life.  Beginning at the Magistrates Court the audience was tried and then transported to an installed environment.  They were taken on a journey through limbo, hell and then finally into heaven. An original soundtrack was made and projections and live feed were used during the course of the performances. 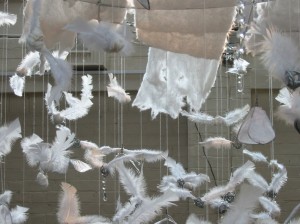 Commissioned by Nottingham University to develop and write three short films drawing on the findings of a two year research project called Charting the Digital Lifespan.  Also created Mondegreen a fictitious organisation as a golden thread between each of the films. The films will facilitate further research.  The project brings together academics and researchers from different universities and disciplines to investigate how people’s digital identities are experienced across key life transitions now and in the future.