I took part in Twelve Little Objects of Hope.   A new theatre project by Andy Barrett.  He is asking for twelve objects, little objects – that have a story of hope attached to them.  He will be taking the objects on a journey to Kosova where he will met a group of writers, show them the objects and tell them the stories.

The object I have given him is a picture of my mother.

Jadwiga Miarkowska aged 15.  When the picture was taken she had been released from a forced labour camp in Siberia and had travelled to Uzbekistan. She had Typhoid.  The story linked to this picture is one of chance, random acts of kindness, luck and always hope.  I’ll tell you the whole story later, but it’s all there in her eyes. 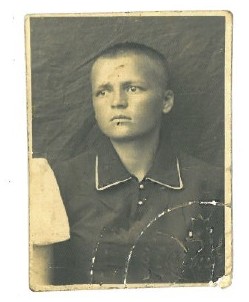